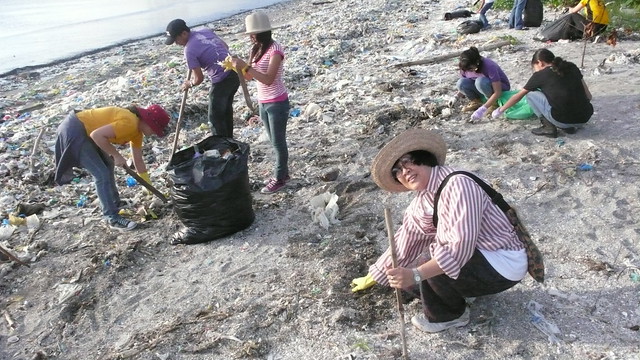 DURING THIS most recent US visit, I had a chance to have a chat over a few beers with Ray Ricario, the older brother of our daughter Demi’s husband Jerry, and with some of Ray’s friends. Born in the US to parents from Albay, Ray’s a retired naval officer and an entrepreneur. He and his family are registered albeit moderate Republicans—as you might expect of Filipino immigrants steeped in a proud military tradition—and Ray knows that Beng and I are passionate liberals, so we have a lively but always civil conversation going about current events in the US, the Philippines, and around the world.

More often than not we end up agreeing on more things than we disagree on, especially when it comes to strengthening ties between Filipinos and Americans, and raising the profile of the Philippines in America. I always look forward to meeting…

Momo Kisaragi has some pretty awesome friends and family. Freaking beautiful. And this may be late already, but happy birthday, Momo-chan! (Her birthday is on February 14, Valentine’s Day)

I managed to survive another week of school (which contained a rappelling session that mentally drained me way more than all the other times I’ve tried rappelling…Ugh, freaking scary Aussie position…), I’ve begun writing another short story draft again, I’m still interested in Third Fang’s Yet again, with a little extra help (ALL HAIL THE LOG), and I need more sleep. And I gotta remember that I’m not alone and that I’ve got really awesome people who are willing to help me out in dealing with my problems. And make some effort in keeping the butt-biters away from your butt, you crazy bear!

Oh, and here’s the link to the mp3 of this cover, if you wanna download a copy of it.

I think I should be making a Some VLOG, but I’ll settle with this as my content for the recently passed week.

Hm, I guess I should try typing how the past week went by in my life as well. I went to the doctor, got some really nice help from him and my parents, my parents lectured me about manners towards girls (Seriously, I thank you very much now, Mom and Dad). I’m still having hard times with trying to write a story, getting enough sleep, and controlling how much time I spend on reading fanfics. I also need to deal with homework and make up for missed school days as well. Freaking nuts, I can sense the butt-biters sniffing and nibbling on my butt that’s been farting a lot recently.

As for the song I’ve recently covered, which is Mafumafu-san’s “Super Nuko World,” it’s pretty much about kitties. Nyao. I really like cats. And the song’s also heartwarming. And I thank descentsubs very much for making an English translation of it. Nyao. Also, here’s a link to an mp3 of my cover of it.

Anyway, gotta deal with more important stuff soon before the butt-biters start a rave party with my butt, the farts, and my intestines . See you again in the den, nutshellcrackers! ^_^

I have finished recording and editing my third Let’s Play series (as for why the second one, Yanderella, doesn’t have a Recommendation Yell for it, well, I was lazy at first, and now, I feel like it’s not worth recommending), the Let’s Played game is another game by Uri-san, and I’d like to recommend it!

Say hello to Paranoiac, nutshellcrackers! By the way, it’s a horror game. If you don’t like horror games, then feel free to stop reading.

Anyway, Paranoiac. It’s a freeware horror adventure game by Uri. It was also made in the WOLF RPG Editor, just like the two Strange Men Series games (By the way, Paranoiac is not a part of the Strange Men Series) that I had recommended, The Crooked Man and The Sandman. Its story is centered on Miki Takamura, a novelist who starts living in her aunt’s house. This game is a horror game, so I feel like I should just let you go see the game for yourself if you want to know more about its story.

Hm, maybe I should drop some hints about this story in this game while I talk about my thoughts on the game. Yeah, let’s try that, crazy bear boy. And don’t spoil your audience here, please.

Okay, so it has mentally messed up characters in it. I’m not that well-versed in the field of psychology, but I feel like those characters were depicted well. I wonder what well-trained psychologists would say if they clear this game…?

Another thing I’d like to say about the game is that the freaking chase-and-hide segments are freaking tough. Uri-san, what’s the logic behind those hiding spots? Being chased and finding out that you’ve been hiding in the wrong spot via jumpscaring photo and sound can be scary, but when put together with Paranoiac’s chase-and-hide and mechanic, it gets less scary and more annoying. Still, I think I did get creeped out at certain points there. And maybe I wasn’t feeling as creeped out as when I first watched a Let’s Play series of this game. I thank PewDiePie and Markiplier very much for the horror endurance training that I got into via watching their horror game Let’s Plays. Hm, I think my mental fortitude has something to do with the uneasiness level that I had when I Let’s Played this game…

But yeah, I think Paranoiac has a significant creepiness factor, despite the freaking tough chase-and-hide mechanic, and I think the story makes up most of what makes the game creepy. And speaking of the story, I think it’s freaking interesting, and I think it reminded me well about the do’s and don’t’s in giving support to depressed people. Also, this game has a good ending, and I think you should work hard to find it if you want to play this game.