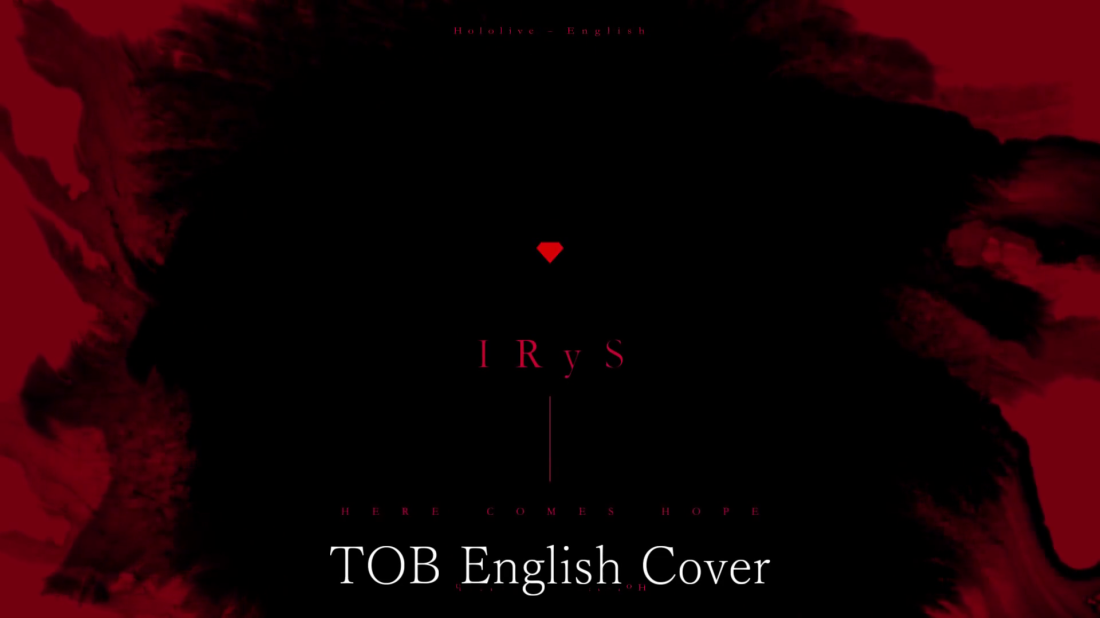 So, working up my vocals for this song got me having more appreciation for IRyS’s vocal abilities. I mean, if I didn’t know better, I’d have thought her voice wouldn’t work well with a song like this. Her singing is already pretty impressive in the other two songs of the Caesura of Despair EP, but her performance here makes her and the EP stand out even further. So yeah, I’d like to describe her voice as silky steel now! 😀

Still, I’d love to sing this song with a rougher and more aggressive approach sometime instead of the cold booming I settled for here. The former approach is definitely gonna be more taxing on my throat and my mic, but I think it’ll make a more fitting vocal performance from me. Like, to be frank, I’d really love to try making the lyrics (or how I understand the lyrics) further sound as insane as they seem.

Also, it’s the return of Shigeru in my works! I’d like to send big thanks to him and his efficiency once again, alright! Special mention also goes to how he managed to make my cold booming here sound sharp!

And again, with encouragement to outdo me some more, here’s the mp3, here’s the lyrics sheet, please don’t forget to credit and link me if you’re gonna use my stuff, and please give me some honest constructive feedback! Another Day, Another Posing

I think my posing’s actually doing me some good now.

Previous Part: “Yeah, I Have Been Getting Scripting Help”

END_OF_DOCUMENT_TOKEN_TO_BE_REPLACED Indeed, I’ve been longing to cover a Your Mori. track, and now here’s one after another cover of a Calli song! This song is also one of my two favorites from Calli’s second EP, the other favorite being “Red.” And I consider Your Mori. Calli’s best work so far, especially thanks to how she manages to elevate the character play into something profound with her own personality in it. With that said, what I particularly like about “Ijimekko Bully” is how engagingly serious she expresses being a functional self-loather, and then there’s how the lightness of her voice carrying those dark lyrics makes the song sound wonderfully unsettling as well. Oh, and if you’re wondering about how I got an instrumental for this track, I got help from alfonsomusic, who did it so freaking well and so freaking quickly! Big thanks to that guy, alright!

Now, as for my approach to performing this song, well, I went for the more visceral sort of unsettling, beastly vibes included. I found that harder to express through the double-time raps, while the slow vocals were easier work. I also added harmonies into the raps. And speaking of which, I’ve been starting to further think that I may be better at vocal performance than at writing lyrics.

But even then, I gotta have good sound quality along with my recorded vocals, and I’m not really good at that stuff, so yeah, I’d like to send big thanks to MegaMat for doing audio engineering here. Special mention goes to how he blended spectral vibes into the intoxicated and maniacal vibes. It also seems like he’s quite a Dead Beat, and that may have been a factor in how smoothly this work was done. And speaking of which, maybe I should try joining that one Dead Beat Discord server sometime?

As for the visual aspects of this production, I asked for ringgopan’s help again thanks to how she draws fancy stuff so well, and yeah, I’d like to send big thanks for those really flattering drawings of me. Like, gosh dang, I look so manly along with classy, I can’t believe it. And I put her on crunch time, too! I feel so freaking humbled as well there, alright.

I also aimed to have a color scheme of black, white, and blue to accompany my more visceral take on the song. I especially enjoyed learning more about the blue rose along the way, and now I’m more curious about that one Suisei song. And I figured out how to use Camera Control on AviUtl again. Still mostly feeling my way around all that video effects and editing stuff, though. But I feel particularly confident about my work on the second verse.

Now here’s an mp3 copy of this cover. And again, please give me honest constructive feedback.

Probably the first thing that motivated me to cover this song is the fact that it has an officially released instrumental (this one’s on iTunes, and this one’s on piapro), which is rare for a Calli track. Though if that really were the first thing, I don’t think I’d have tried as much as I did to sound emotional while recording my vocals for this cover.

And speaking of sounding emotional, I start to further think again about how I may really have acting talent, for better or worse. I mean, considering how more personal this song is to Calli than it is to me and my probably more normie ass, I feel like I’d also be scared if my performance here moves you to tears or something close to that. And again, I think about why I’d want to make my life out of stuff like singing and acting, especially considering the volume of horror stories I’ve come across about the scenes there and how I could just work this office-turned-home-based job for stuff like gaming achievement hunting and anime binge-watching. And then I remember how I’d rather live life like it’s one of the pieces of fiction I indulge in, but way better, whatever that’s supposed to be. I feel like I’m already living that life I want more and more, too. Praise and thanks be to God Almighty very much again, then, and may He keep on helping us all.

Also, I’d like to send big thanks to DarkHole for doing audio engineering on this cover. I particularly like the grainy feel put into the mix, and then there’s the wonderful work on my blended vocals.

And yes, I wrote and sang some translyrics based on Calli’s “Live Again.” Maybe it’s also a teaser for a future music upload.

Now, here’s an mp3 copy of this cover. And again, I’d like some honest constructive feedback.

Yeah, I Have Been Getting Scripting Help

Previous Part: “Spooky Greetings from a Guy in a Nice Guy Costume(?)”

END_OF_DOCUMENT_TOKEN_TO_BE_REPLACED

This is another impulse production, and this time, you can more clearly see that it is one. I mean, for one, I sang “wherever” instead of “whenever,” a translation error I didn’t notice until the last minute. And then there’s how I sang the bridge, especially “Yes, even so, this little light.” I figured out how I should’ve made it sound at the last minute, too. And I think I also messed up in recording “Now I say, let it glitter on until it starts to melt away.” There’s a bunch more to point out, I think, but hey, the point is that that’s what I get for trying to churn out this much this fast, and that I should be more forgiving to myself while still striving to improve more and more (especially if I got the meaning of the song right), hahaha… X”D

On the other hand, my quest to make English covers out of them holoEN original songs in Japanese continues with this song by holoEN VSinger IRyS, and I still have a lot of confidence about my lyric writing and musical vocal abilities. For one, I like the grand and fantastic vibes I worked up here. There’s also the playing around I did with the “I” and “we” in the choruses. And then there are those growl moments. Also, I’d like to send big thanks to Leanna for doing the audio engineering on this cover, and special mentions go to her enhancement of the grand and fantastic vibes and to her tuning in the final chorus!

And now, with even more encouragement to outdo me, here’s the mp3, and here’s the lyrics sheet. Please don’t forget to credit and link me if you’re gonna use my stuff, too!

And of course, fire away with honest constructive feedback!

Spooky Greetings from a Guy in a Nice Guy Costume(?)

Honestly, I find this refreshing. I just hope that that alternate Lisa isn’t having too much trouble there…

Previous Part: “On The Overlord Bear’s Passion for VTubing”

END_OF_DOCUMENT_TOKEN_TO_BE_REPLACED On The Overlord Bear’s Passion for VTubing

Renewed passion, to be more exact. So, who’s interested in backstage VTubers?

Previous Part: “Lisa the Tearable States the Obvious About Me Again”

END_OF_DOCUMENT_TOKEN_TO_BE_REPLACED

If Cover’s looking for lyricists who can write in English for hololive English, then I’d like to present this as another sample for that…though I don’t know how well my translyric writing skills would translate (heh) into my original lyric writing skills.

So yeah, my covers of VTuber songs are still all holos, and this new addition is the totally human girl with the totally normal name that is Ina’nis Ninomae. My voice is definitely not as comfy as hers, but I did enjoy going and lower and softer for this song with a composition by seibin and original lyrics by LUMINA. And speaking of my vocal work for this, I think the hardest parts of the vocal work here are the choral parts. I mean, for one, you’ll notice that I skimped on the bridge choir.

As for how I wrote the lyrics for this, well, I decided to write them in a way that more obviously relates to the title of the song, hahaha~ That, and whether or not I subtracted from the meaning, I definitely made a lot of additions to it, probably even more than the subtractions from it. Also, I think “It now all feels secondhand, but let the second hand on” is one of the first lines I wrote in these lyrics. And I hope that Ina likes my wordplay at least.

And again, I’d like to send big thanks to Shigeru for mixing and mastering for me. And I’d like to give special mention to his work on them choral parts and those interlude lines. Freaking beautiful work yet again, yo, and with such amazing work speed as well!

With all that said, here’s the mp3, and here’s the lyrics sheet. Again, please credit and link me if you’re gonna use my stuff~

And of course, please feel free to give me honest constructive feedback!

Lisa the Tearable States the Obvious About Me Again

Well, in hindsight, it’s obvious, but still, I should’ve been canceled a long time ago, right?